We had plans, Anthony and I: hike rainforests; rappel waterfalls; practice yoga together; write a book about his very unusual life—violent, then redemptive. Finally, he would live again a free Hawaiian man on his beloved Maui. 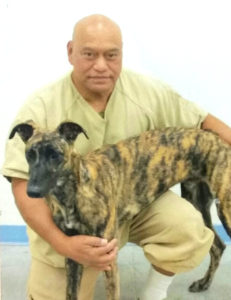 Anthony had a powerful love of animals, so he was chosen to socialize retired racing greyhounds in prison. He was happy and sad when his dogs were adopted, but that was the goal.

But, it is not to be. It is all hypothetical past tense as I learned from the astonishingly real front-page headline in The Maui News.

“Infamous murderer recalled for his laughter.”

I read it as I carried the paper into the house. And then I don’t know where I went, apparently standing inside, yet gone, almost unconscious. Not breathing. Not crying. Stunned.

Disappointment overwhelmed me. Anthony will never see his beloved Kahakuloa Valley again. He won’t see how modern Maui has become since he went to prison in 1978. He won’t meet his grandson. He won’t start his “Talk Them Straight” program for at-risk high school kids.

Anthony planned to visit high schools to teach local kids what happens when you go too far kolohe (crazy). He had already started his program while incarcerated in Maui’s prison. He made sure these tough kids walked out afraid of him and afraid of prison. He was a good actor, brutal and intense. “You can be our bitches in here,” he’d tell them and they soon crumbled. He didn’t mean it, but he didn’t let on.

Of all the ideas we had for his reintegration, death was never considered. He was 66. He died the same year he was supposed to return to Maui to start reintegration. After 41 years he was going to get out. But, he died of a heart attack on the way to his Toastmasters’ class. Yes, he took every class he could in prison.

Twenty years ago, his girlfriend Susan asked me to help him write paperwork to request an upgrade from his solitary cell in Maui’s prison. Saturday nights he had two-hour shackled visitations in a meeting room, and once the paperwork was done, I kept visiting, and over time, Anthony became a dear friend, truly charismatic and a great story teller.

Eventually, he moved to an Arizona prison for Polynesians. On Maui, he was locked up alone 23 hours a day; in Arizona he could roam the prison freely. His first week there he called me and said: “MJ, I can go to the cafeteria at 1 a.m. if I want to. I have a roommate. I can go into the yard and get sunshine.”

I haven’t mentioned that he killed two people he didn’t even know. He was a hired assassin, paid to shoot them, then scoop up a pile of diamonds in their condo. He was a heroin addict and an angry Vietnam vet and he liked being a very bad guy.

But, with maturity, (over decades) came humility and wisdom, and this kolohe bad guy grew into his real self, got clean, put in his time, read and studied and opened to new ideas. He had hope that even a murderer can start fresh. Anthony was months away from that chance. He did deserve it; he was a different man.

I am so bewildered.